An annual Marathon and Half Marathon run on a one-lane blacktop road in the beautiful Nebraska Sandhills south of Valentine.

The Sandhills Marathon begins near the west end of the Brownlee Road, where it meets Highway 97, between Mullen and Valentine. The Road, a one-lane blacktop, winds southeast through the Wamaduze Valley until it reaches the town of Brownlee (unincorporated), then runs east along the north bank of the North Loup River. The course finishes on Highway 83, between Thedford and Valentine.*

The Half Marathon will begin at the half-way point about the time the full marathoners are reaching that point. The courses are mainly flat with the road traveling through valleys between rolling Sandhills on either side. There are a few hills, but only a couple that are substantial.*

Limited transportation will be provided to and from the course.

*Course direction for both races subject to reversal depending on weather conditions. 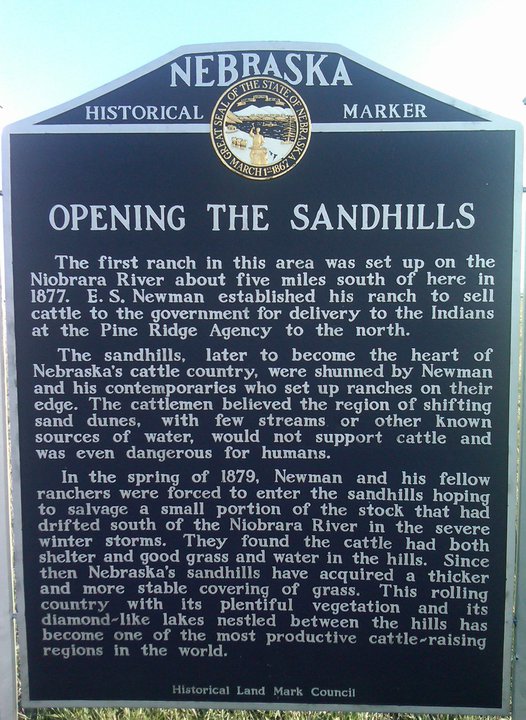 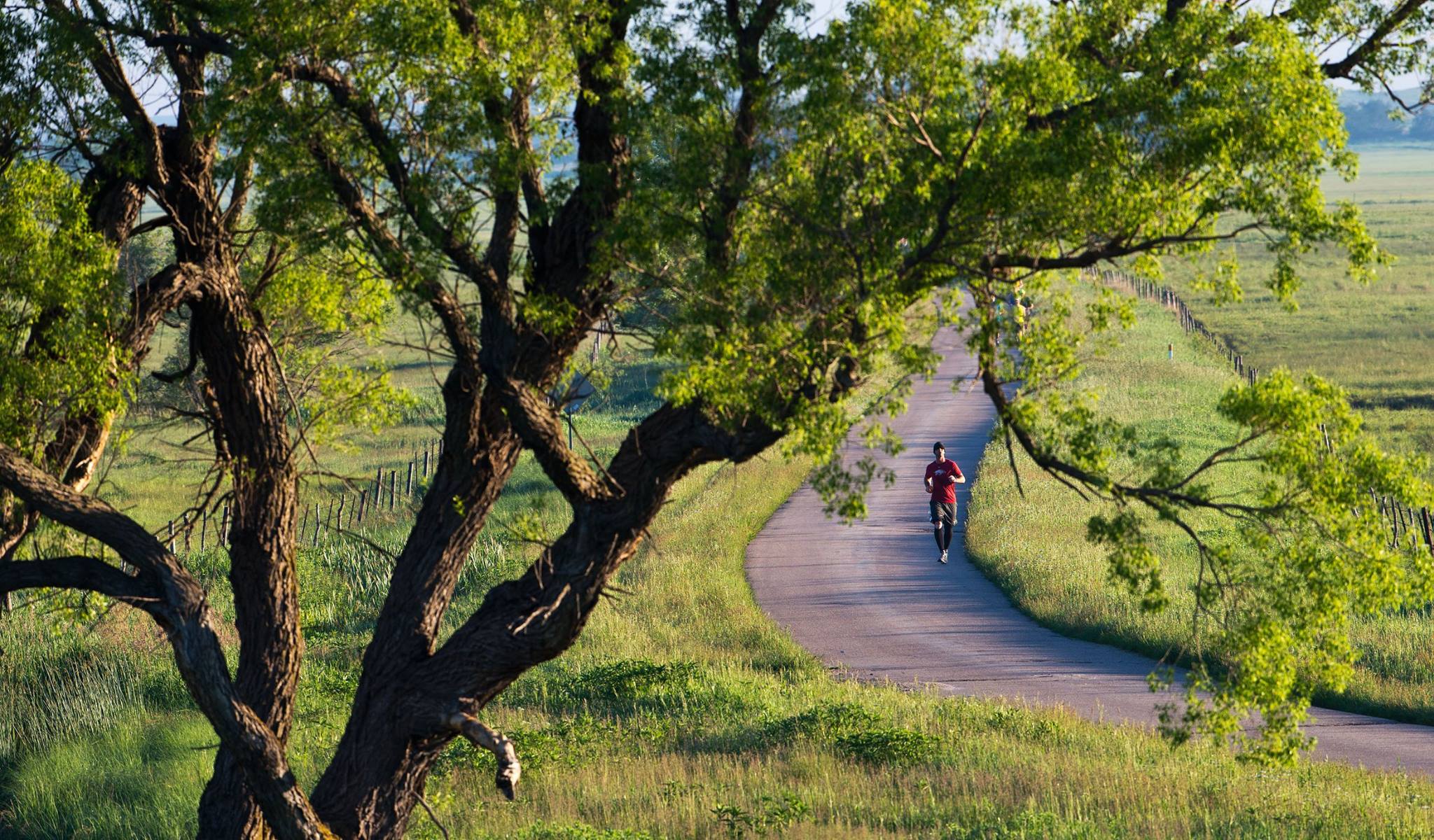 It started several million years ago, when a natural dam burst, unleashing a torrent of waters that blasted through the cap rock of the Ash Hollow formation. Wasting no time, the waters cut a canyon like no other in Nebraska. Water from the spring that formed the massive (and now non-existent) lake composed a rippling stream that found a home in the new canyon. Centuries later the stream made a perfect habitat for trout.

The first time I saw the Snake River was 1996. I learned to fly fish there. Since then, I have caught (and released) an abundance of trout – many rainbow, a number of brown and a smattering of cut-bow. Driving from my home in Lincoln through the seemingly endless Sand Hills, I didn’t expect to find this treasure: the pine-filled canyon and the stream. When I show friends photographs taken from the bottom of the canyon and ask them where it was taken, Nebraska is not among their first five guesses. Colorado, Wyoming, Montana, Utah, Idaho. Not Nebraska.

I love the Snake River, the fishing, the prehistoric fossils scattered throughout its bed, but getting there is half the fun. If you haven’t been to the Nebraska Sand Hills, you are missing out. Satellite photos show the Sand Hills for what they are, massive dunes of sand. The dunes run northwest to southeast, blown by the prevailing winds. What you see on a closer view depends on the season. In the early summer, when we run the Sandhills Marathon, you see oceans of green. A tenuous covering of grass has planted its roots over the centuries. The valleys are a lush green; the hills a softer hue. In the fall, only a little green remains to pepper the blond grasses that sway like waves in the ceaseless Nebraska wind.

Year-round natural lakes laze prolifically throughout the valleys. In these lakes you are looking at the massive Ogallala Aquifer, which underlies the Sand Hills and eight states. The waters seep through the soft sand and form pools that provided habitat to numerous critters you wouldn’t expect to find in the middle of America.

Another source of my affinity for this land springs from my family’s roots there. My Grandpa Buck owned the Rolling Stone ranch 20 miles south of Valentine, and 20 miles north of our Marathon route, until the early 1970s. While I love to take in this country and its denizens – mule deer, pelicans, turkeys, trumpeter swans and Angus galore – I found myself succumbing to the desire to wet my fly. And this weakness led to a search for a shortcut and another discovery, the Brownlee Road.

The Brownlee Road – or the Brownlee Cutoff, as it is known to locals – is a one-lane black-top that winds up the Wamaduze Valley. I remember my first drive on it. I left Highway 83 and followed its winding course to the northwest, hoping it would take me to Highway 97, as Nebraska’s official highway map shows it does. I had my doubts. It is a narrow road that looks as though, at any moment, it might come to an abrupt end. Along the road, and amid those doubts, I took in scenery second to none: mountainous sand hills; yawning valleys, a bend of the North Loup River, the tiny village of Brownlee (population: about 8, the sign says), and numerous wildlife. The map proved true, and the road deposited me onto Highway 97. I traveled it past Merritt Reservoir to my fishing site along the Snake.

Several times I took the Road – for the time it saved and the views it afforded – and during one of the trips, the runner in me spoke: ‘this would be a great place for a long run.’

I shared that thought with a fellow runner and fisherman, Scott Schwartz on a later trip up the Road. Scott agreed with my observations. The next trip that Scott took with me, we asked Steve Mossman – another fisherman friend, to whom my spouse refers as my ‘fishing wife’ — to reset his odometer when we left Highway 83. We wanted to see just how long the road was. Reaching Highway 97, we looked again at Steve’s odometer. It read 25.7 miles. We looked at one another. All marathoners will know what was going through our minds.

At that moment, Scott and I decided the road must be run. Half a mile must be tacked on. Add it to one end, running a ways on one of the highways? Cleve Trimble, the retired surgeon, on whose ranch we fish, supplied the solution: run into Brownlee and back. The course was set.

Logistics immediately became the next concern. It would be no fun to park two cars at either end, and wave to one another as we passed near the mid-point. We’d get a group of friends, maybe six or eight, together and run each way. Somehow — I can’t really tell you how — people started to hear about our plan, and we quickly realized we would have to be at least semi-formal about the run.

The name went from the Brownlee Road Marathon to the Sandhills Marathon; more people would relate. We measured the course. Water stations were plotted out. Volunteers were summoned. The purists in us gave way to a plea by several to run a half-marathon. We’d originally planned to run from Highway 97 to Highway 83, but one runner, Parker Schenken prevailed upon us to run from east to west. Crossing from Central Time into Mountain Time would shave an hour off everyone’s time, ensuring a World Record and PRs for all. On Saturday June 9, 2007, the first Sandhills Marathon was run.

Twenty-eight were registered. Twenty-seven started. Twenty-four finished. Sixteen full marathoners and eight half. (For more details on the races, see The Finishers’ Page [hyperlink].) As those pioneer marathoners will tell you, this course is not for the faint of heart. Cattle outnumber spectators by an inestimable ratio. Elsewhere in this site, you can find an eloquent account of how these cattle sometimes like to run with the runners, written by former Champion Brian Wandzilak. Trees, and their attendant shade, are as sparse as the spectators. The air is dry. The wind blows freely. The sun shines bright. While there are only two sizeable hills on the full marathon route, this marathon is decidedly difficult. The power of the runner’s will is challenged by all the fierceness of this wild land. The reward of any marathon is great, and the Sandhills ranks among the most satisfying. We offer the world’s best Finisher’s Prize, bar none – a Silver Spur engraved with Sandhills Marathon and the year. The Finish Area is a mix of runners in their funny shorts and running shoes, coupled with local ranchers decked out in their work suits of wide-brimmed hats, button down shirts, blue jeans and cowboy boots.

A word on the local supporters. Their enthusiasm and support for our event has been outstanding. Rancher John Lee volunteers his pasture for the Finish Area. Jason Taylor, who works at the Blackford Ranch, and his growing family are our greatest local ambassadors. Young’s Western Wear has supplied our Finisher’s Prizes each year. Marsha Bauer and her crew at Valentine’s Niobrara River Lodge have been gracious hosts since the Marathon began. The Cherry County Board has offered its support and assistance, and Bill Sokol & Co. have kept our runners safe and our minds at ease by tagging along behind the pack in their Ambulance. That’s a long, slow trip in a vehicle!

We weren’t without our skeptics. The first year, we called each rancher along the route. We met with everything from enthusiasm to admonition. One rancher warned us that if he saw anyone cross the right-of-way fence into his pasture …“well, we have a way of handling things out here.” That rancher was among the crowd of spectators who greeted our runners at the Finish the first year. He wore a smile and was shaking his head at the crazy event we had brought to his land. His hospitality and guardedness were both welcome. It taught us a lesson in how much these people cherish their land. It is their lifeblood. Each year, we take two trips up and down the road after the event, picking up any litter our runners have left. And each year we pick up more beer cans tossed by passing fisherman than we do Gatorade bottles. We leave the road better than we find it, out of respect to the people and the land.

To conclude this history of the course, I’ll point out that in Year Two (2008) we reversed the course for two reasons: first, it is slightly uphill from east to west (despite what Mr. Wandzilak might say!); and second, the prevailing winds blow from the NNW that time of year. The route has been adjusted only slightly since. We start a little farther from Highway 97 where there is room for safe parking. And we run through Brownlee and don’t turn around until the runners have crossed the North Loup. It continues to be a beautiful, arduous run. The course has been altered since Sandhills No. 1, but the views have remained unchanged …for the last several million years. 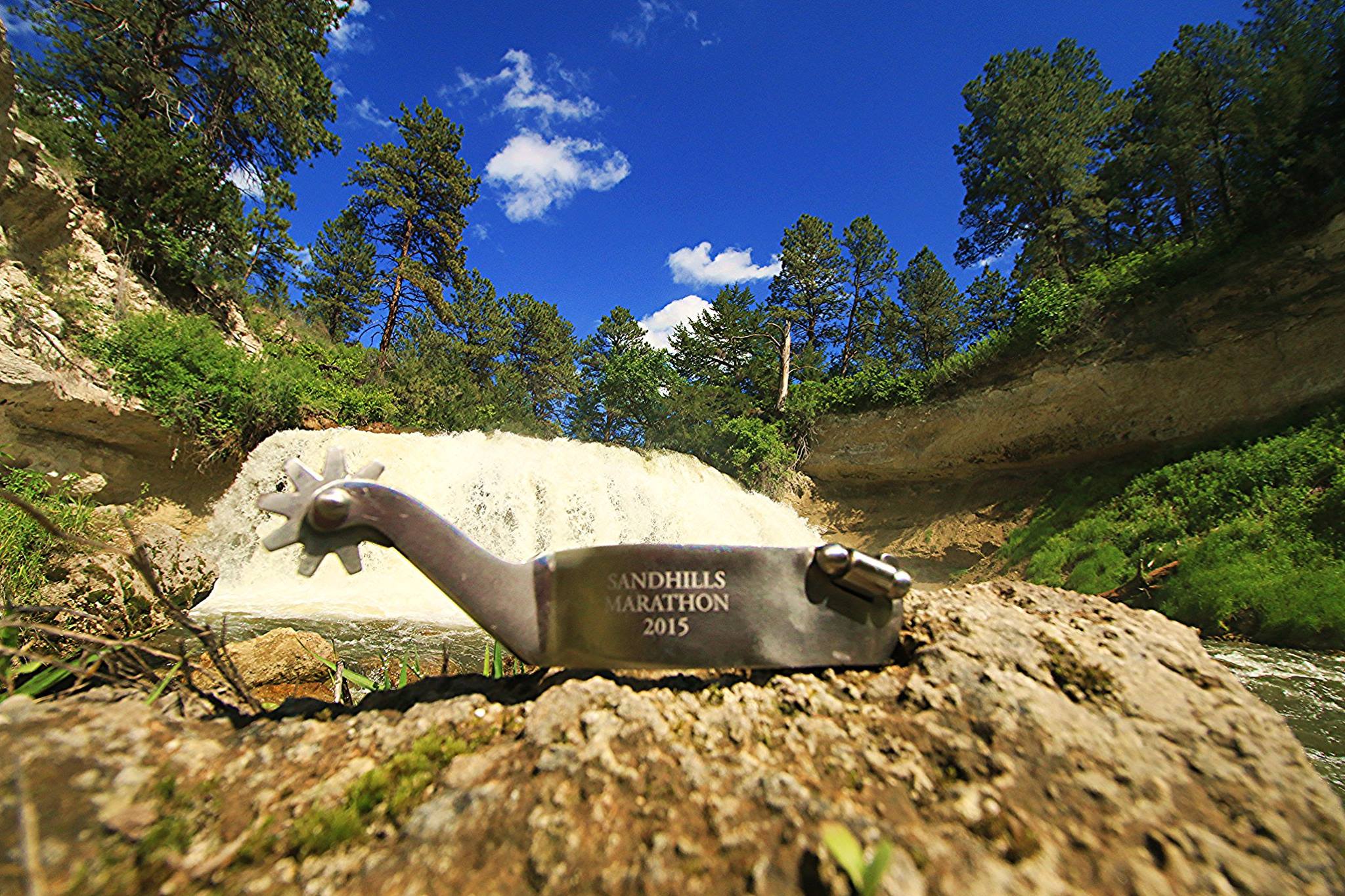 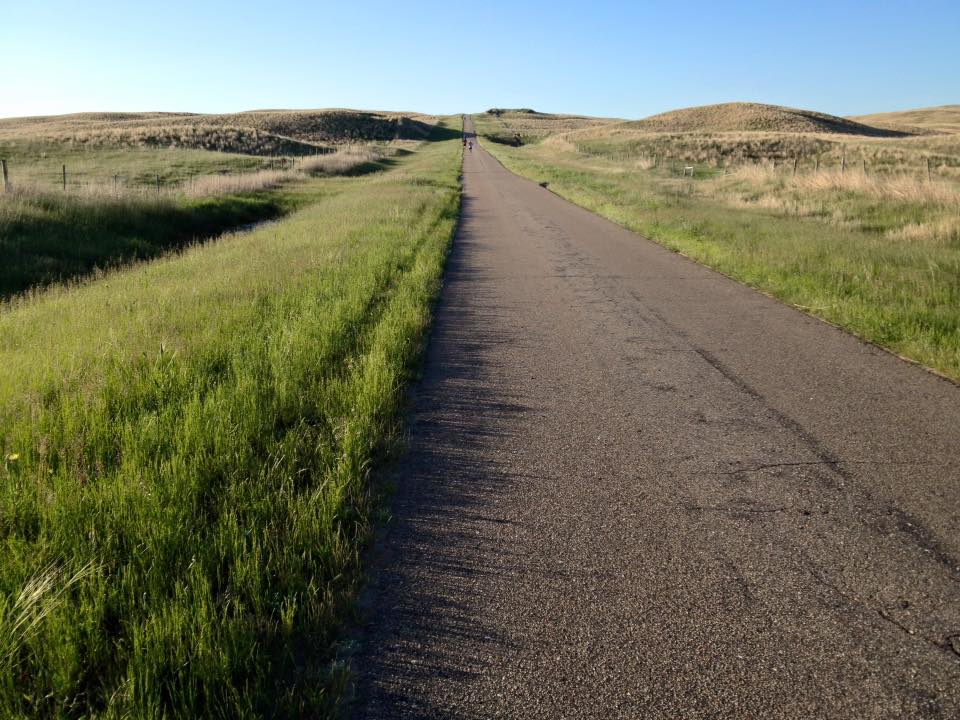 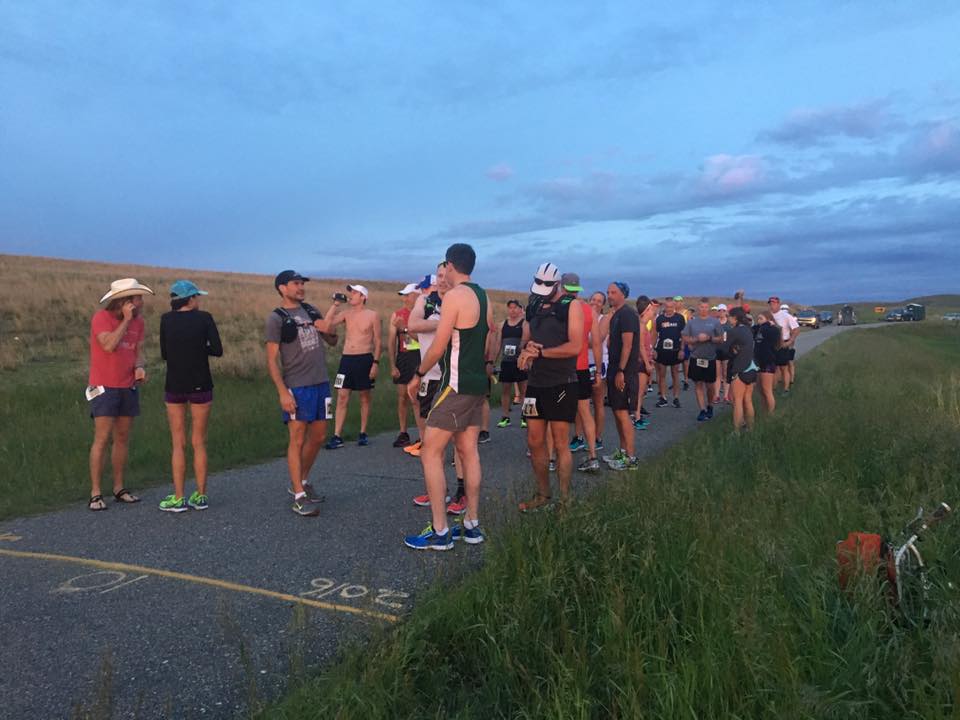 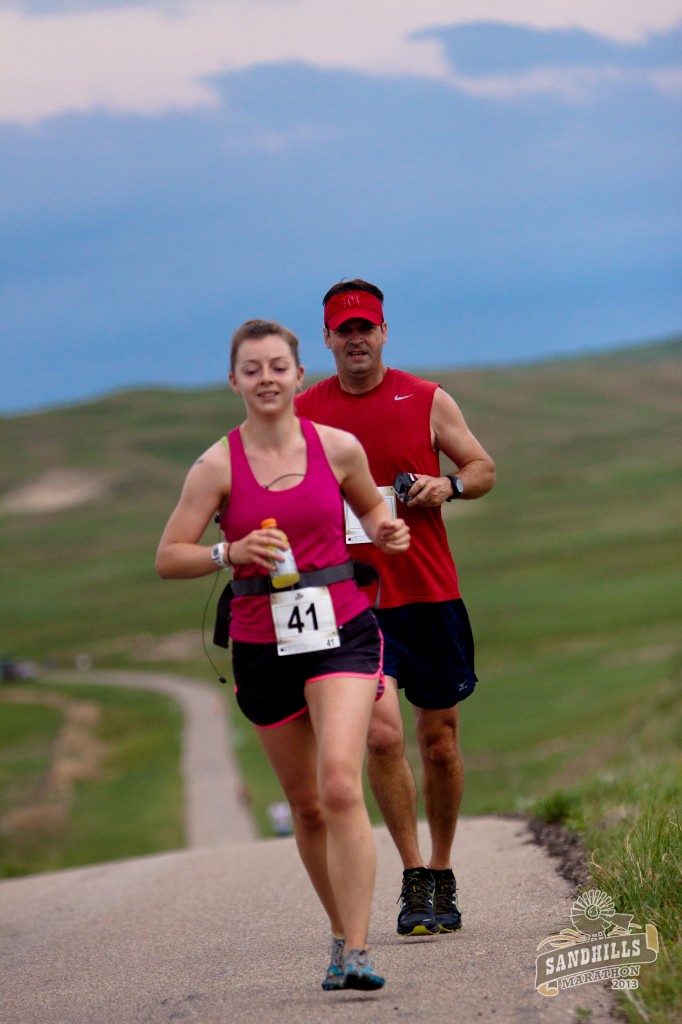 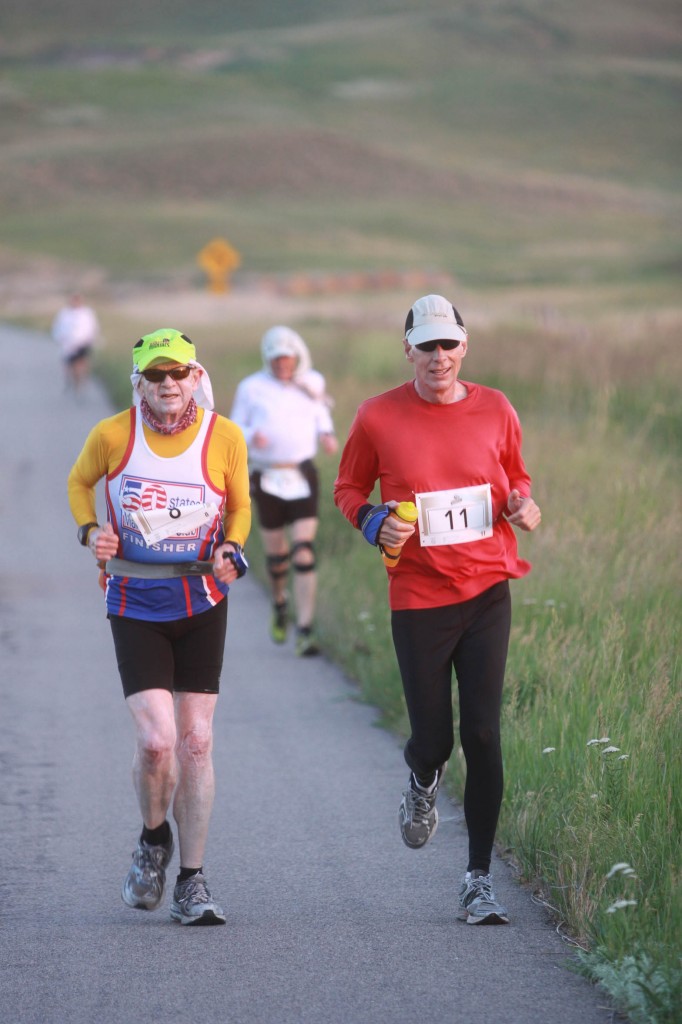 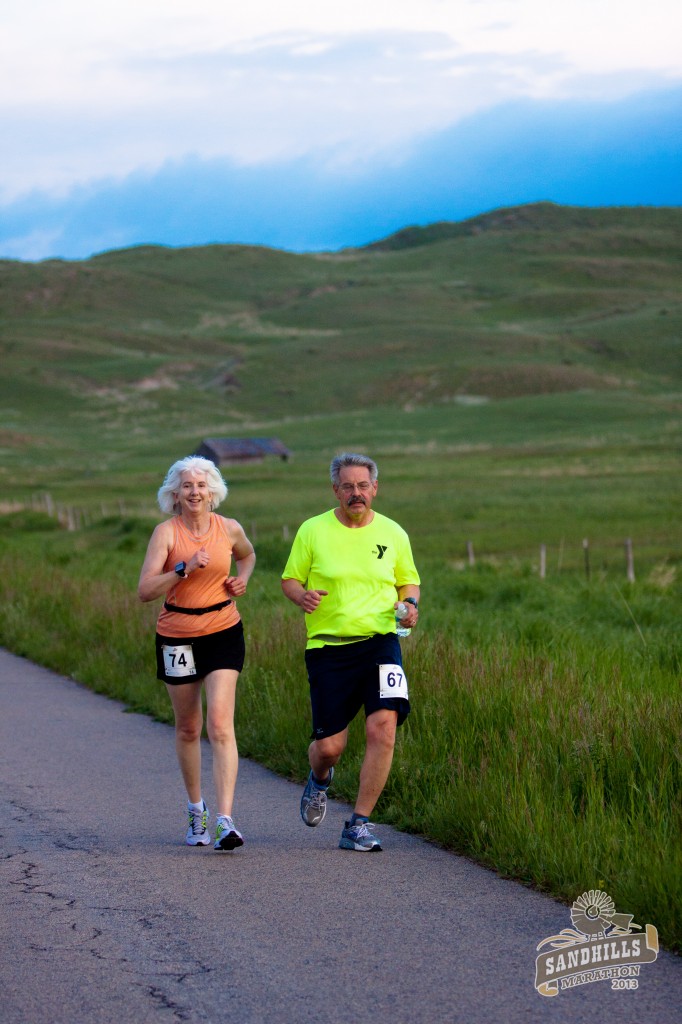 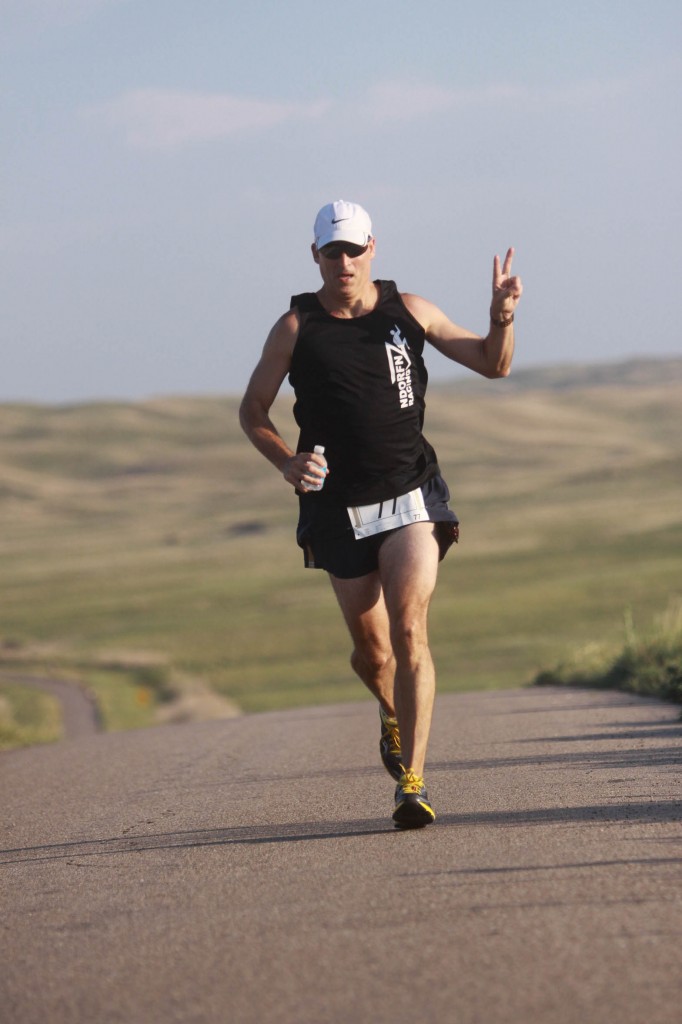 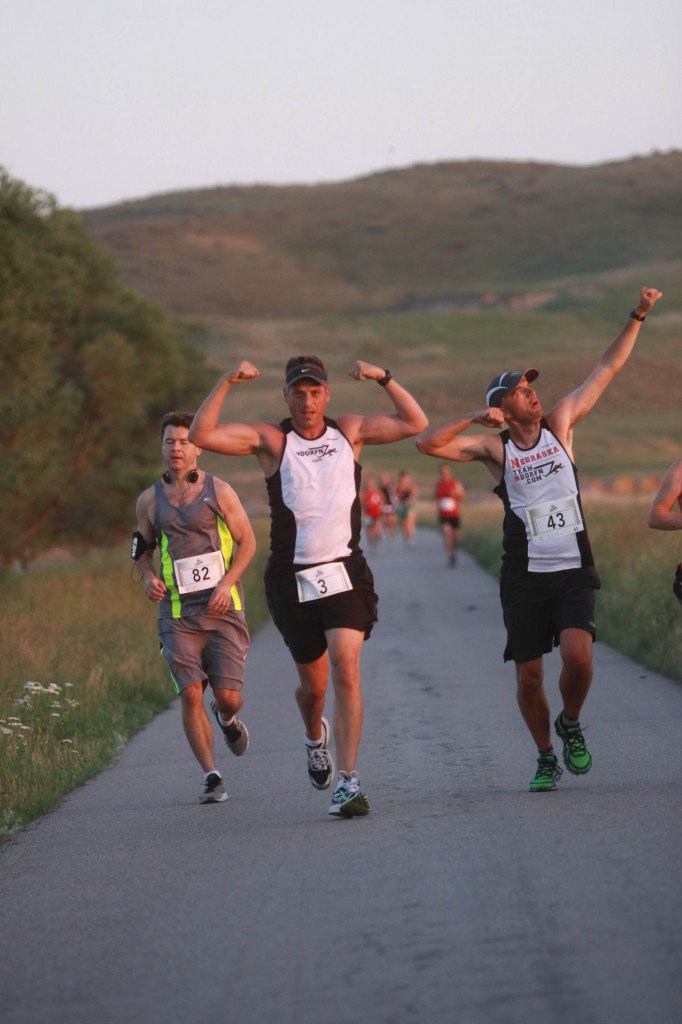